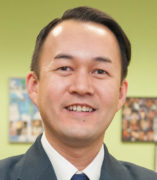 Dr. Mark R. Martell became the director of the UIC Asian American Resource and Cultural Center in January 2015. He began his career in higher education, in 2000, at UIC Campus Housing. After, he worked for Semester at Sea and for Inspiration Corporation. In 2005, he returned to UIC to work at the Student Employment Office and recently at the Office of Career Services. In the past, he has served as Co-Chair for the Chancellor's Committee on the Status of Asian Americans and has served on various campus organizations including AARCC's Advisory Board. In addition to participating in a number of Chicago's Asian American, LGBTQ, and theatre organizations, Mark has taught at Harold Washington College and for the UIC College of Education and Asian American Studies. Mark earned his PhD in educational policy studies at UIC, and his research explored the racialized experiences of UIC Asian American students and the effects on their student success. Mark is also co-principal investigator for the UIC Asian American and Native American Pacific Islander-Serving Institutions Initiative, where he assists in facilitating grant programs and assists in teaching Asian American courses. He also teaches Asian Americans in Pop Culture, Superheroes and Cultural Mythology, and Comics & Society at the UIC Honors College. Mark is a 1.5 generation Filipino American who grew up in Miami, Florida.